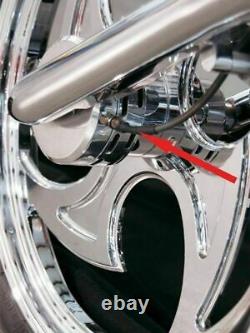 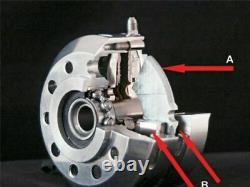 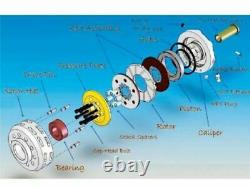 THESE ARE BRAND NEW AND I HAVE NEVER USED 360 BRAKE CALIPERS OR HAD ANY EXPERIENCE WITH THEM. THIS KIT COMES WITH THE BRAKE CALIPER ASSEMBLEY AND 1 TOP HAT BUSHING , EVERYTHING IN THE 1ST PICTURE ONLY. I DO NOT THINK THE COMPANY IS STILL IN BUSINESS. It looks as if you have no brakes at all, when in actuality you have on average 60 percent more brake pad touching the rotor than with conventional brakes. The stopping is smoother because you don't have the pull of a caliper 6 to 8 inches away from the axle.

The brakes now encompass the axle and keep the bike straight during hard stops. According to 360 Brake, the system was installed and tested in-house and by an independent testing company on a Harley-Davidson Softail. In these tests, from 60 mph to 0 the bike stopped an average of 16 feet shorter than anything the developers had run against it. Tests also showed that because the brake applies pressure to pads that go completely around the axle, the lever-arm effect of feeling as if you're getting thrown over the handlebars in an emergency stop is greatly reduced.

Instead, the rider experiences more of a squatting feeling as the brake creates downforce instead of upforce, which helps the bike stay planted to the road both front and rear. The 360 Brake also applies downward pressure to the back tire, increasing contact with the road and allowing harder braking without losing traction at the back tire, thus maintaining better control. When increased brake pressure is applied to a motorcycle with a front and rear single-caliper and rotor setup, the bike has a tendency to pull to the side that the brake system is mounted on. The dynamics of the 360 Brake reduce the pull of the brake, causing the bike to track straighter with more control under braking. The 360 Brake System also changes the dynamics of how the bike handles in a stop.

When you take a large steel ring and bolt it to the side of a wheel and get that wheel spinning, you change that wheel from being a typical wheel to being a gyroscope. When you stop the wheel from spinning (as in a panic stop), you lock up the wheel.

The brakes stop the wheel from turning, but the inertia of the gyroscopic effect kicks in. This gyroscopic effect is what brings the bike around. Instinctively, the rider will start to counter with his steering, and all too often it ends up in an ugly tank slap, high side and down.